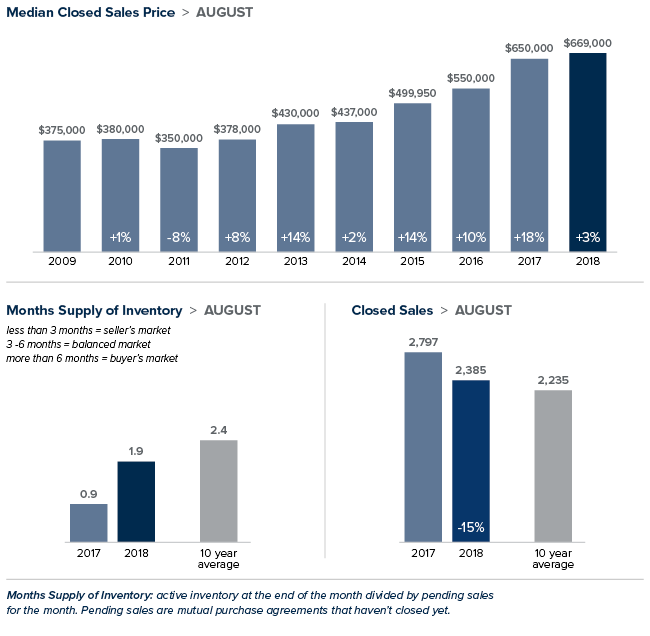 The number of homes for sale in August increased dramatically over the same time a year ago. This is the result of a moderate increase in new listings and a much slower pace of sales. Homes are staying on the market longer, giving buyers more choices and more time to make an informed decision. While home prices are up compared to a year ago, the rate of increase was in the single digits rather than the double-digit surges of past months. It’s still a seller’s market, but sellers need to have realistic expectations about pricing their homes as the market softens. 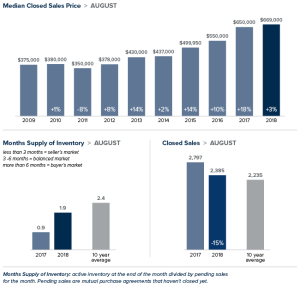 King County experienced yet another flood of inventory with the number of homes for sale jumping 65 percent over the previous year. Despite the growth, the county has just 1.9 months of inventory and remains a seller-oriented market. The market has slowed but it remains fast-paced, with 62 percent of the properties here selling in fewer than 15 days. While home prices were up 3 percent from a year ago, the median price of $669,000 represented the third straight month of declines from the record-high of $726,275 reached in May. 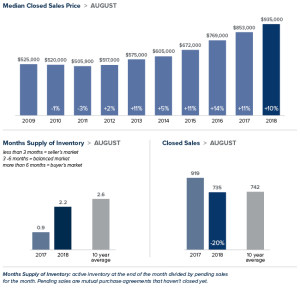 The median price of a single-family home on the Eastside was up nearly 10 percent from the same time last year to $935,000. Home prices have declined each month from the all-time high of $977,759 set in June. Inventory increased 73 percent over last August. With supply soaring and home prices moderating, sellers need to work with their broker to price their home to meet the current market conditions. A year ago 47 percent of the homes on the Eastside sold for over list price. This August that number was down to 29 percent.

After leading the nation in home price growth for nearly two years, Seattle is finally cooling off. The median home price in August was $760,000, up just 4 percent from last year and down from the record $830,000 reached in May. Inventory soared in August, but the city still has just two months of supply, far short of the four to six months that is considered balanced. Bidding wars are becoming less common and price drops more common. Sellers must adjust their expectations to what appears to be a long waited moderating of the market.

Mirroring the market slowdown in King County, Snohomish County also experienced a cooling off in August. The median price of a single-family home was $492,000, up 8 percent from a year ago but down from the record high of $511,000 two months prior. Inventory increased nearly 30 percent, but at just 1.6 months of supply the market remains very tight and sales are brisk. Sixty percent of homes here sold within 15 days.

Related Articles
buying Investing In a Green Home Will Pay Dividends In 2019 As we step forward into 2019, eco-friendly “green homes” are more popular than ever. Upgrading your home’s sustainability improves quality of life for those residing in it, but it is also a savvy long-term investment. As green homes become more popular, properties boasting sustainable features have become increasingly desirable targets for homebuyers. Whether designing a […]
real estate The Gardner Report – Second Quarter 2018 The following analysis of the Western Washington real estate market is provided by Windermere Real Estate Chief Economist Matthew Gardner. We hope that this information may assist you with making better-informed real estate decisions. Economic Overview The Washington State economy added 83,900 new jobs over the past 12 months, representing an annual growth rate of […]
housing market Are We in a Housing Bubble? As home prices in King County have reached record highs, some people are wondering whether we are approaching another housing bubble. While it’s true that home prices here have surpassed the last peak hit during the housing bubble, that doesn’t mean we are in bubble territory today. The last bubble was fueled by faulty mortgage […]